We didn’t think it would be useful to cover the proven inefficacious use of hydroxychloroquine and chloroquine on this blog. By the time we had launched, studies had already begun to question speculations circulating on social media of its efficacy for the treatment of COVID-19. The American Medical Association, along with national pharmacy organizations, published a joint statement condemning inappropriate self-prescribing by physicians, and it seemed as if its use was no longer commonplace as it fell out of the headlines of mainstream media. However, its utility in the pandemic has continued to be promulgated, as we can see from the recent erroneous viral video promoted by “America’s Frontline Doctors.”

With hydroxychloroquine back in the spotlight, we have seen new policy implications around its use that need to be unpacked for members of the profession of pharmacy. The Ohio State Board of Pharmacy was the first to take such a drastic step as the emergency rule that will be discussed in this post, but it could have national implications if other states take similar actions.

The State of Ohio Board of Pharmacy

Starting in March, the State of Ohio Board of Pharmacy was taking action to ensure the appropriate prescribing and dispensing of hydroxychloroquine. Fearful of medical decision making based on social media rather than evidence and the potential for shortages of the medication, which is used chronically for lupus and arthritis, emergency rules were approved on March 22nd. These emergency rules required that hydroxychloroquine prescriptions bear a written diagnosis code, and if written for COVID-19, a confirmed positive test was required, along with a limit of no more than a 14-day supply, with no refills allowed.

Following these emergency rules, no further action was taken for three months, until the “America’s Frontline Doctors” erroneous viral video began circulating. In July, the State of Ohio Board of Pharmacy took an unprecedented step of issuing an emergency rule that prohibited the prescribing of hydroxychloroquine and chloroquine for prophylaxis and treatment of COVID-19. This rule was quickly met with pushback by Ohio Governor Mike DeWine, who referenced Food and Drug Administration (FDA) Commissioner Dr. Stephen Hahn, appointed by President Trump in 2019, that the decision to use hydroxychloroquine should be between a physician and a patient. 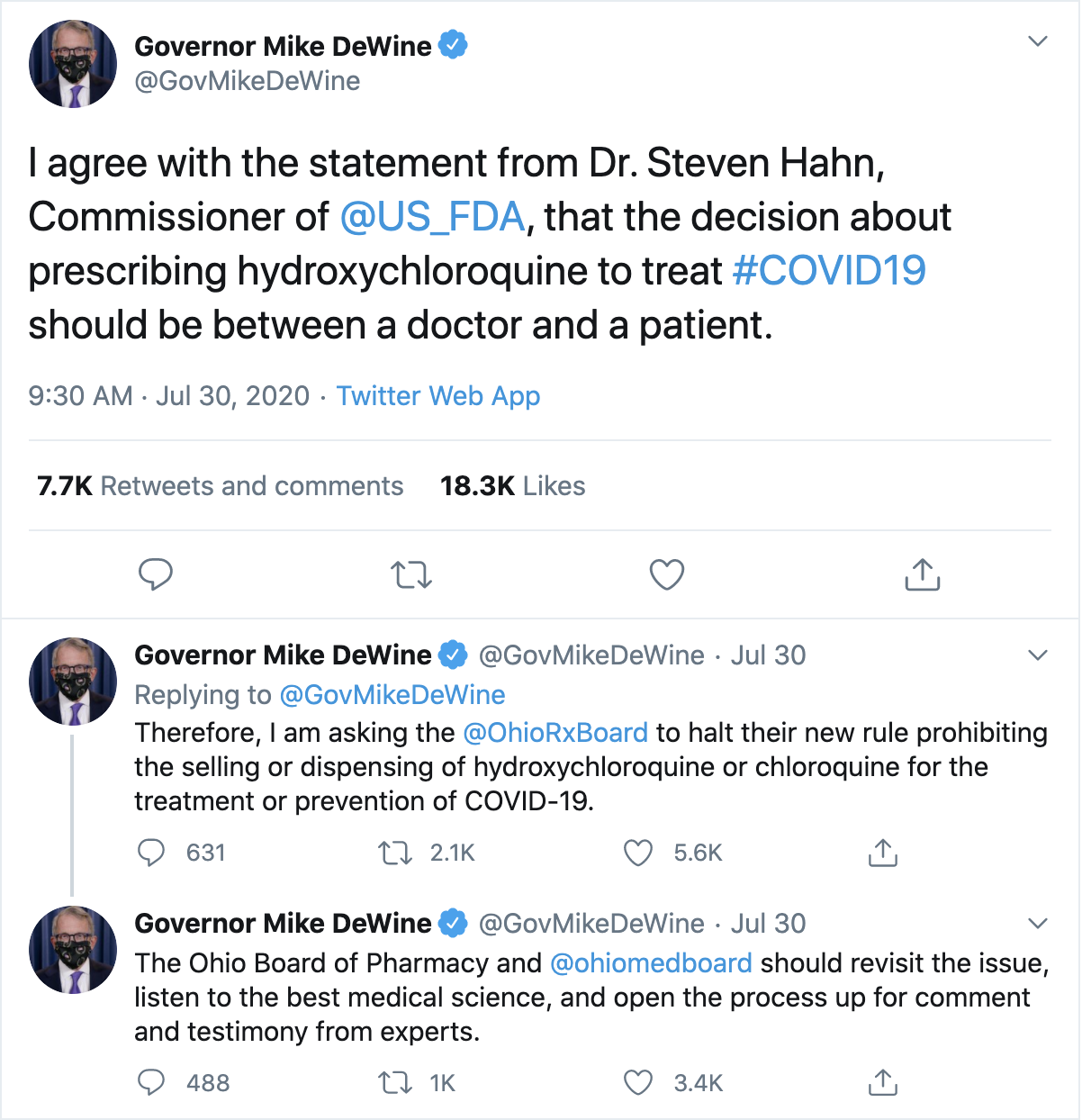 With this feedback, the State of Ohio Board of Pharmacy quickly reversed action, withdrawing this emergency rule. Although after a few days’ time nothing ended up changing, this (almost) policy change was unique in how Boards function, and could have implications for pharmacists and future rules in other states.

The Cons to the Board’s Emergency Rule

The purpose of a board of pharmacy is to protect the public. That is their primary mission, and the reason that they frequently oversee such responsibilities (depending on the state) such as licensure of members of the pharmacy personnel, oversight of prescription drug monitoring programs, and adoption and management of rules to best protect the public. You can even see the tie back to this purpose when the Ohio Board of Pharmacy explained the reason for their most recent emergency rule as being a patient safety issue. However, this rule is starkly different from other regulations created by boards. Boards are not the regulatory body that approves or disapproves of medications for different therapeutic indications. We all know that responsibility is with the FDA. Boards also don’t declare which medications are controlled substances or scheduled; that is in the purview of the Drug Enforcement Agency and FDA. It is important to note, though, that some states may place more stringent restrictions on medications than the federal government, and boards of pharmacy may be engaged with this process.

Off-label prescribing is a frequent practice in medicine that is utilized when there is sufficient evidence to support the use of a medication, but it has not been blessed with an FDA approval for that indication (just to be clear: we are in no way making the argument that there is evidence to support the use of hydroxychloroquine for COVID-19). The lack of an FDA approval for an indication could be for a variety of reasons, but oftentimes it is because the manufacturer of the medication decides there is not enough of a financial incentive in order to go through the expensive FDA approval process.

This emergency (almost) rule by the State of Ohio Board of Pharmacy appears more aligned with actions commonly taken by federal agencies like the FDA or DEA, and not necessarily by a board of pharmacy. A big con to such a rule would be the fact that it could set the precedent that another regulatory body that does not have the traditional expertise or procedures like the FDA could further limit access to medications that it deems create a “patient safety issue.”

In an era where healthcare professional decision making is often dependent more on insurance formularies rather than what the provider’s expertise believes is in the best interest to the patient, we should not be in support of a rule that could further limit access to medications that could benefit patients from off-label prescribing. Again, this concern does not apply to hydroxychloroquine or chloroquine, which is not effective or safe for the prophylaxis or treatment of COVID-19, but is more of a fear of the liberty a board may take in the future once this precedent is set.

The Pros to the Board’s Emergency Rule

These are not normal times, and we are seeing the traditional checks and balances of our healthcare system break down, such as the inappropriate self-prescribing of hydroxychloroquine by physicians. Is there a role for boards of pharmacy to step in during states of emergency and ensure evidence-based decision making is being adhered to? This is not a question that we can answer, but we believe that although there are potential long-term consequences to such a rule, the original intent of the regulation was positive. In a time where science and politics are so dramatically colliding, one is left to question the intent of the stark rebuke of the rule by the Republican Governor of Ohio.

Governor DeWine has made national headlines and received praise throughout the pandemic for his dedication to listening to public health officials and not resorting to the propagation of pseudoscience. However, this request to rescind a rule that would promote evidence-based decision making by healthcare professionals for the treatment and prophylaxis of COVID-19 seems uncharacteristic. The request is aligned with the narrative that has been widely distributed by the Trump Administration.

Health policy is incredibly important, as it dictates how our healthcare professionals practice and how accessible their care is. One can only hope that the policies that govern healthcare workers are themselves evidence-based, but we should not be blind to the influence that politicization of issues has on health policy. We should scrutinize health policy with the same level of vigor as we do any peer-reviewed literature. This emergency rule has pros and cons, and although it is rescinded, we must remain vigilant as you can be sure further emergency rules will be adopted by our Boards of Pharmacy before we overcome this pandemic.

Published by The Grassroots Pharmacist

One thought on “Board of Pharmacy Restricts Hydroxychloroquine, then Caves to Ohio Governor”